Our aim is to help the children to acclimatise to a change in expectations from KS1 and to become more independent, pro-active learners. We believe learning in an inspiring, fun way helps the children to engage in their learning and develop positive learning behaviours.

What we think about Class 3

“In the morning, we learn about Maths and Literacy, last year we were reading Letters from the Lighthouse by Emma Carroll.” Louis (Yr4)

“Recently in Literacy we have been learning about Blitz poetry and personification.” Eddie (Yr4)

“We learn a lot in Class 3 and that is one of the reasons I really like it. Another reason is because some of the work really stretches me to think hard and learn more.” Zachary (Yr4)

“Science is very fun, especially when we learn about light reflecting and complete experiments.” Olly (Yr4)

“Dementia friends is a charity we support, as they have taught us how to understand people with Dementia.” Zachary (Yr4)

We have had a fantastic time away on our residential at River Dart Country Park. When we arrived, the children did a series of activities on the adventure playground. After lunch, we all took part in raft building, learning how to tie various knots to hold the raft together. Then the children all got on their rafts and paddled in the lake, which was great fun! In the evening, we went on a walk into the woods and toasted marshmallows and sang camp songs.Today, we have climbed up poles, balanced along beams, built a tower out of crates and whizzed down a zip wire! The children have behaved impeccably and have thoroughly enjoyed the whole experience; the bunks in the dorms were great fun to sleep in! We have finally managed to wear them out, but everyone wanted to stay another day and the food was delicious!

On Wednesday 13th March 2019, Class 3 spent the day learning about the Roman Invasion and the impact on Britons. We came dressed as Britons and were part of the Dumnonii Tribe, which were resident in what is now Devon and Cornwall. A local expert led the day and took on the role as a Roman optio (second in command to a centurion). He brought a vast range of artefacts to display which really enhanced the learning and understanding of the day. The classroom was our Roundhouse and the Briton artefacts were on display for the children to handle. The hall was the Roman zone and there was a huge amount of Roman items, from swords and spears, to clothing and food. There were even small amounts of pumice, which was taken from Pompeii! The children had to decide if their tribe was to accept Roman rule, pay taxes but could carry on their lives in peace; become a Roman citizen and join the army as an auxiliary soldier; or fight against the Roman Empire and maintain their lives as Britons. We had a lively debate, with many children changing their minds as to what their choice was. The children had been given roles for their part of being in the tribe and they worked together not to give away the identity of the druid, as the Romans did not tolerate them! The afternoon was spent practising army formations using the shields the children had previously made. They had to follow strict instructions (spoken in Latin!) of where to stand and how to hold their shields, whilst simultaneously marching forward towards the enemy! We then had a battle outside with Class 2 being the Britons. The advancing army was very intimidating, with their shields, helmets and tortoise formation working as one unit!

On Wednesday, my classmates and I came into school dressed as Britons as we are learning about The Romans and were having a Roman Day.  In the morning, Class 3 was full of real artefacts that originated from the Roman era.

During the course of the day we created our own clay models to replicate precious gifts that were exchanged during the Roman times.   After lunch we went up to the hall. There were lots more artefacts and weapons such as swords, Spears and bow & arrows.  We also took a look through the types of food they ate in the Roman times.  These were presented in liquid format.  We took out the cork and smelt the food, it was disgusting as it was fish oil.

Later on in the day we went to battle with class two. They threw balls at us which represented spears and bow & arrows.  We defended and protected ourselves by using the turtle formation. This is where we use our shields to cover our heads and the shoulders of our fellow soldiers in front of us.   It was so much fun. 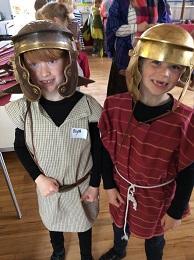 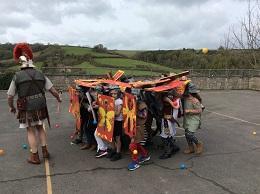 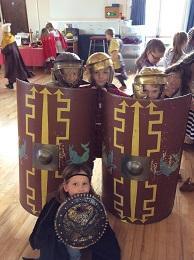 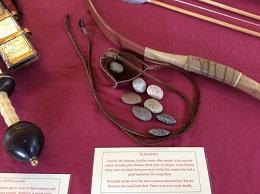 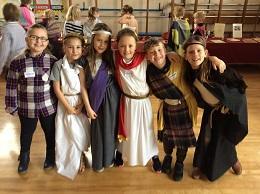 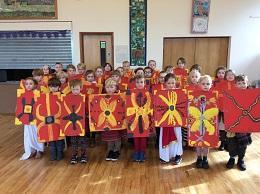 First of all, I got dressed as an evacuee, I wore a blue dress, a beret, a label, tights and a gas mask box. Then I got to school, and Miss Squire was dressed as Mrs Henderson and Mr Simier was dressed as Mr Barrowman, these are characters from our class novel, and they looked great. After that, Mrs Henderson did the register, rather than calling our first names, she called us “Miss … or Master….” A couple of minutes later, we started to think of questions to ask at the tea dance that afternoon.

After that, we marched silently up to the hall and had our photos taken. The masters were first, the miss’ joined in later. Next, we had to open the brown old envelopes that Mrs Henderson handed out. The letters were sent from our new families in Budmouth Point, they explained who we were going to live with, as we were being evacuated from London. My letter detailed that I was going to stay with a lovely lady called Mrs Jacobson and her two 8 year old twins, William and Florence. A little while later, we found other evacuees that were going to become our families. Within my group was Oliver, Isaac and Charlotte, we were very excited and also nervous about leaving. Then we made a video diary about our letters and what we think of them, as well as how we feel about leaving. Before we knew it, 3 children from All Saints had joined our family, they were called Evie, Ellie and Grace. We had some time to get to know them and learn one fact before repeating this to both classes.

Soon, we silently marched up to Waterloo Station, this was daunting as we were not sure what was in store for us! The sign told us we were going to depart from Waterloo and head towards Budmouth Point in Devon.  As soon as we arrived at Budmouth Point, we strolled down the hill to our brilliant new school. When we arrived, we played two war time themed games called “Mother May I” and “Red Light, Green Light.” We started with Mother May I, this was an exciting game that we could play at lunchtimes. You play by, nominating one person to be the mother, this can be a Miss or a Master. The mother tells us an action, before you move you have to say, “Mother may I?” and If they answer “yes” you complete the action and if they say “no” you MUST stand still, or you get sent back!!

After that, we played a second game, called Red Light, Green Light. You play by nominating  one person to stand facing the wall, at the opposite side of the playground. Once they’ve turned to face the wall, everyone else tries to creep up on you silently and If you hear them, they HAVE to go back to where they started! We played a few games of this, before heading to lunch.

Eventually, lunch was over. We practised “We’ll meet again,” as the residents from Lyme Bay View Residential home began to arrive. Once we had completed the song, we had an opportunity to talk to the elderly members of our tea party, in our family groups, and ask the questions we had written earlier in the day. One of the questions we asked was “What was your role in the war?” I was amazed and in shock by the amount of information they told us, considering how long ago it happened. I was also very engaged by their stories. John, one of the elderly members of our tea dance, was part of the Home Guard. He explained that he carried messages from the two Home Guard lookouts/stations, one being Membury Castle and the other was Honiton Bridge. He also got very close to a bomb, for it dropped outside Membury Castle while he was there.

John’s wife Margaret told us that she had an evacuee who stayed with her, called Jean, who was very kind. Jean used to cry, because she missed her mum. She was evacuated with her sister who went to live with someone she knew.

Afterwards, All Saints had an opportunity to showcase their dance. Theirs was Charleston themed. We thought it was very good and made us nervous to show ours. Once we’d plucked up the courage, we showed off our dance. We hoped everyone enjoyed it, for we had put so much time and effort into creating it. Luckily it went really well, and we had a big round of applause from the audience. I am not sure whose was better, but they were both brilliant.

After a while, you got the opportunity to be WW2 waiters and waitresses to serve cake to our guests. At this point of the day, I was feeling over joyed by how everything was going. As time went on, we were allowed to have some delicious cake, it was too good for words!

Soon, we sang we’ll meet again, FOR REAL! This time it sounded amazing, I think it may have been slightly out of tune, but nobody noticed. Also, we sang the National Anthem for the UK and republic of Ireland. This went well, as well. Next, we had a dance in the hall. Izzy,

Gemma and Emily were dancing with John and everybody was having a great time. Meanwhile, back in class a very different sort of dance was going on. All Saints were preparing to leave with their teachers Mrs Brown and Mrs Gabb.

Overall, I had an absolutely awesome day, it is something I will remember FOREVER.

On Tuesday 9th October, Councillor Dawn Squire came into school to teach us all about Dementia. After taking part in several games, each child has successfully taken part in a Dementia Friends information session, gaining a Dementia friends badge, that they are proudly wearing around school. During this information session, the children learned about the dreadful disease that currently affects more than 850,000 people in the UK, which is set to rise to over 1 million by 2025, according to the Alzheimer’s Society.

They discussed; how connection paths in the brain can be broken, which is why some people forget things, that everyone thinks differently and this disease can have an impact on different people in different ways, finally finishing with a game of bingo, to reinforce the 4 main messages.

The 4 main messages we learned are:

1) Dementia is not a natural part of ageing.

2) Dementia is caused by a disease of the brain.

3) It’s not just about losing your memory.

Our topics in previous years 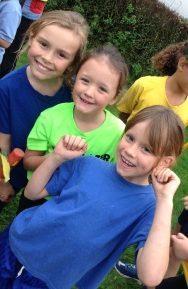 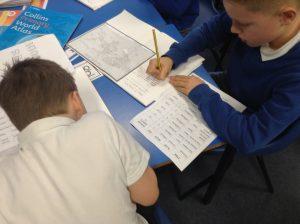 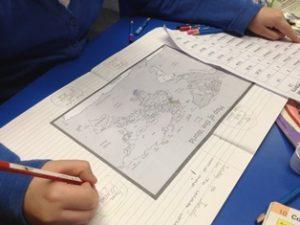